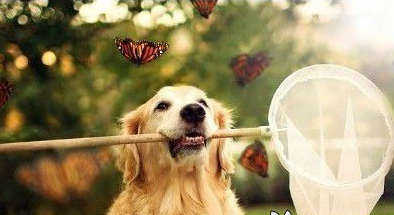 Candice Sedighan has a passion for two things: her golden retriever, Champ, and photography. Over the last few years she’s been able to successfully bring the two together.

“I wanted to take photos and show people things they’ve never seen before,” the 20-year-old photographer and college student tells The Weekly Flickr.

“I really like to capture the true essence with dogs, which is that they’re always so happy,” she says. “The time Champ and I spend together, he’s just always beaming with happiness and you can really see that through my photos.”

Candice got Champ as a gift from her Dad in the winter of 2002. He was just 9 weeks old at the time and, as she describes him, he was a “’Marley and Me’ type of puppy”.

“He destroyed probably everything in his sight!” Candice admits. “He ate a lot of rugs, thousands of dollars of damage. He had a lot of excess energy and I tried to channel that into training instead.”

She began taking pictures of Champ when she was 13 years old. At first it was to create personal memories, but after getting positive comments, she decided to join Flickr.

Candice joined a group called “52 Weeks for Dogs” where members take pictures of their dogs once a week for an entire year. The group gave her the encouragement she needed to pursue her photography, allowing her to develop her unique style.

“Champ and I really are like a team when we do our ‘52 Weeks for Dogs’ project,” says Candice. “He really works very hard to do the poses I’m asking him to do.”

More importantly, she saw Champ was responsive to her photo shoots and recognized an opportunity to take her craft to the next level.

“My favorite photo of Champ is the one with the butterfly on his nose,” Candice explains. “I know a lot of people just automatically assume maybe that I photoshopped the butterfly in, but I actually went over to a butterfly farm and bought butterflies.”

Her years of training Champ proved to be a success as he patiently sat with a live butterfly on his nose. The pictures turned out beyond any of her expectations.

Candice says she gets her inspiration from “everyday life.”

“Sometimes I’ll go to the store and find a really nice prop that I want to use,” she says. “Or I’ll find a nice location and I think, ‘Wow, I really want to use this in a picture’ or ‘this would look really awesome in a picture.’”

Candice has taken close to 20,000 pictures of Champ over the last 7 years. During this time she’s won about $5,000 in contests, including three for Hallmark. She now has three cards available nationwide; one birthday card and two Mother’s day cards.

In the midst of all the success, Candice values the special bond between her and Champ above everything else. He has been a source of comfort for her, especially during the most difficult times.

In the Summer of 2012, Candice’s father passed away very unexpectedly. “My Dad was definitely supportive of my photography,” she says. “He always told me how creative I was and bought me my first DSLR.”

Photography has become a great outlet for Candice after losing her father.

“Since my Dad was the one who picked Champ out and named him, so in a way it makes him even more special to me,” she says. “It makes me feel like my Dad will always be here with me.”

What’s next for Candice? She dreams of coming out with a calendar featuring Champ, but she definitely plans to pursue photography.

“I really like to take happy photos,” she says, “And I hope when people see it, they see it as more than just a dog picture. I hope they’ll see it as art.”