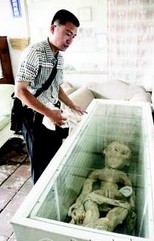 A Shandong man who admitted his claim to have killed an alien and stored it in a freezer was a hoax was arrested after his story went viral on Chinese social media.

Binzhou resident Li was sentenced to five days in detention for creating false reports and disturbing public order after admitting to police that he had engineered a hoax as a publicity stunt on June 10, according to China Radio International.

Initially, the farmer had posted his close encounter on a Chinese website, together with a shaggy dog story about how he had captured the alien while setting traps for rabbits.

"I was setting an electric trap for rabbits by the Yellow river when I saw a bright light," he said. "Above my bike, a UFO was floating. One by one, five aliens came down, but one of them stumbled into one of my rabbit traps and was electrocuted. The others went back into their ship and flew away."

After Li uploaded photos of the "dead alien" online, his encounter was instantly questioned and ridiculed by thousands of net users. Many others seemed simply entertained by Li’s outrageous story and "amateur" alien photos.

Shandong police said on Monday that Li had admitted his story was a hoax after he was called in for an investigation. Li had spent 120 yuan to buy the rubber and other materials from local farmers to make the alien, said police.

"After the police interrogated me, I confessed I was a fan of UFOs and the alien was a fake. I just wanted other people to believe that aliens existed," he told the Shandong Evening News.