If the Academy gave out Oscars to three-year-olds, little Kirsten's herculean efforts to lift her bowl into the sink after dinner would have surely won the 'best performance in a tantrum' category.

A father recorded his toddler's hilariously over-dramatic attempts to pick up her bowl from the floor, despite her claims that it was 'too heavy' for her to lift.

To prove her point, Kirsten groans and strains as if she's trying to hoist a boulder. She never gets it more than an inch off the floor before slamming it down for exaggerated effect.

She does this not once, not twice, but seven times before she finally makes it all the way to the sink -- less than three feet away.

'What's the problem?' the father asks his daughter after she dropped her bowl on the floor before reaching her destination.

'UGHHH!' she strains. 'I can't do it,' she says as she cries and crawls away.

'You can't lift that up?' her father asks, sympathetically.

'Come back and try again, you're almost to the sink,' the patient father says. 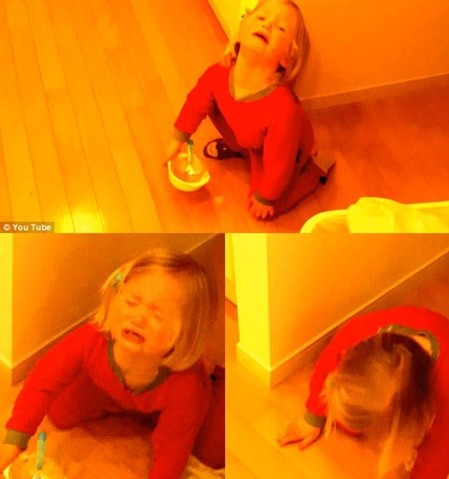 She crawls back and and tries it again. She makes straining noises that sounds as if she's about to throw out her back and become permanently bed-ridden.

'I'm not big enough,' she protests.

Her father, meanwhile, is coaxing her on with a tone that is at once encouraging but also seems to say, 'I'm on to you, kid.'

'That looks very heavy. I thunk yoi can do it though, Kirsten,' he reassures her.

'I think you can lift it up to the sink. And you can help clear the table.'

After her seventh try, Kirsten finally lifts to bowl, still 'straining' under its weight, takes three steps and shoves it onto the counter next to the sink.

She then falls to the floor, crying, still sticking to her original story that the bowl was impossible for her to move.

The video has attracted enormous popularity since it was posted on YouTube earlier this week, gaining more than 600,000 views. The father comments on the posting: 'And the Oscar goes to...'

One commenter praised his tactics: 'And great job Dad, making her do it anyway. And she got a good lesson that her tantrums don't work. You pick your battles but don't give in. Great job.'

The father also gives a hint as to whom Kirsten might be thanking in the acceptance speech for her Oscar: She hadn't taken a nap.